Recently I had the opportunity to visit with my doctor, and he related a tale of disaster while trailering his boat.  It began with the purchase of a new Grady White 24-foot fishing platform, delivered by the vendor to his dock.  A great boat for both fishing space and heavy seas.  What he had not anticipated is the boat would not fit on his boatlift.  In South Alabama the water gets very warm in the summer and al kinds of things try and attach to a boat hull and grow.  Without a boat lift bottom paint is a must.  With that in mind, he contacted the local marine services facility and arranged to bring his new boat in for bottom paint.  With the paint he could moor his boat at his dock, and when he hauled in the late fall the bottom should be clean.

His problem was he did not have a trailer that was large enough for his new boat.  He did have a friend, however, who had a double axel disk-brakes trailer that should be more than adequate for his needs, so he arranged to borrow the trailer to move his boat to the marine services shop.  He hooked up to the trailer, drove to his take-out ramp and brought the boat from his dock to the ramp.  The boat just fit the trailer bed but loaded easily.  After strapping it down securely he headed for town.

Boats Can’t Fly… But They Will Try

Doc lives a little off the beaten path on a local river feeder stream, so he took it slow coming out until he reached the highway.  Once on the open road he accelerated, and the boat tow presented no problems.  When he came to the main river there is an elevated bridge to allow the passage of sailboats as well as power boats to pass under the bridge, and as he climbed and reached the peak the boat and trailer began to gyrate, swaying from side to side and putting a lot of stress on the hitch coupler and bow tie down.  The boat then began to shift on the trailer bed and put enough pressure on the front winch support to tear it off the trailer frame.  This freed the bow and caused it to elevate as he headed down the backside of the bridge.  The gyrations continued with the stern down and the bow up, and threw the boat off the trailer, turning it upside down on the roadway.  When the boat released from the trailer, the trailer also broke free from the tow vehicle and turned over on the roadway.

Unfortunately, Doc had just put-on fuel before they delivered the boat, so almost 100 gallons of gasoline began spilling and impacting the roadside environment.  The police, fire department and highway department responded to the scene and ultimately cleaned up the spilled gasoline and had the damaged boat and trailer removed from the roadway.  The new boat was a total loss as it was literally smashed to pieces.

After careful investigation, the cause of the accident was uncovered.  Grady White makes a very heavy hull, and it had almost 800 pounds of fuel and about 600 pounds from a 225 horsepower Honda outboard in the stern.  The boat was tail heavy.  This would not present problems while on the water, but it did create an imbalance situation when the boat was on the trailer, especially as the trailer was not specifically designed for the Grady White hull.  There was not enough support on the stern and while going up the incline of the bridge gravity came into play, pulling the stern down, lightening the down force on the trailer tongue and coupler, causing the initial gyrations.  When the winch support snapped off and there was no hold-down for the bow, the stern dropped even more, and the bow came up.  The imbalance caused the trailer to gyrate more and eventually flip and turn the boat over on the roadway.

Epilogue:  Always be aware of weight balance on your watercraft, both on land and on the water.  Proper trailer hull support, passenger placement and fuel, equipment and gear locations all play a role in maintaining a proper balance.  You do not want to end up with a wrecked or sunk boat because you overlooked the forces of gravity…. On land or in the water. 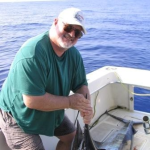 Hi this is Captain Earl. One spring day I had a group of anglers onboard and we were chumming near the Chandelier Islands sand bars hoping to attract a Cobia. ...