The sun had dipped below the horizon and I was nearing the end of my shift. So far, the day had been filled with routine calls, nothing exciting but certainly important to the boat owners and captains who needed assistance.

I had just completed towing a 23-foot Wellcraft center console experiencing engine problems to where their trailer was parked at the Bold Point Ramp in the North River. Fog was beginning to roll in, so I was keeping one eye on my GPS and the other on the pulsing radar screen as I left the dock and picked my way south between the channel markers. Visibility was becoming an issue and I wanted to get back into open water as quickly as possible. I was about to check in with Rescue Boat dispatch when my VHF radio sounded.

I heard Dispatch Captain Mark’s steady voice, “Rescue Boat Phoenix, Rescue Boat Dispatch, we have a 35-foot sailing vessel aground on the rocks south of Fogland Point in the Wakonnet River. The Coast Guard is on scene and will free the vessel from the rocks. There is a storm approaching and the weather is closing in fast. Can you take this call for assistance since you are the closest to their location?”

My mind was racing, yeah right, closest to it but still 23 nautical miles away.

I responded “Mark, I can make the run and will tow them back to Silverton Boat Basin. I have plenty of fuel, but I am only able to make 12 knots in this pea soup fog. ETA to vessel in distress is two hours at current speed.”

“Roger that,” Mark responded, “but you should break out of your current weather south of Prudence Island and should then be able to make better time. You will be in better visibility in 10 minutes.”

“Roger that. Rescue Boat Phoenix standing by channel 16, 07.” I reached down and switched on my flashing red and yellow emergency strobe lights and immediately noticed that they cast an eerie shadow in the fog.

“Mark, you should be a weatherman, I just cleared the rain and fog, the sea conditions are flat and calm, and I am now making 35 knots. Revised ETA on site is 23:45 hours.”

“Good going Hal, I thought it would get better. Coast guard has the boat off the rocks and will standby until you arrive. Good luck, keep me posted.”

As I switched back to channel 16 and returned the microphone to its overhead clip, I could again hear the rumble of thunder over the now high-pitched throbbing of my engines. Speed at night on the water can be both exhilarating and scary. My wake formed a sharp V behind the boat and was nearly flat at this speed. Under these conditions and at this speed, there’s little danger of my falling asleep at the helm despite the late time. And such a limited visibility window!

As I approached the Wakonnet River Bridge I could see that something was going on, there were blue strobe lights flashing under the center span. When I slowed to pass under the bridge, I saw a Coast Guard 34’ Safe Boat, and the crew was hailing me. As I pulled close, they said they had just come from Fogland Point and had pulled the sailboat off the rocks. They told me she had not been holed by the rocks, was not taking on water, and was safely anchored just off the shoreline. Her crew of 5 seemed capable and calm, but her engine had failed and there was no wind with which they could sail back to port.

All things considered it was a welcome report. They said getting her to safe harbor was now up to me and that they were on their way to yet another vessel in distress. They headed north and I south.

I again powered up and made good time until about 1 mile north of my target. The fog bank rolling in made it almost impossible to see my forward tow post which was only about 8 feet in front of the pilothouse window. This was the epic “pea soup” fog. Back to instruments and about 8 knots of speed.

Fortunately, I could see the distressed vessel on my Furuno radar and combined with a GPS was able to reach them without incident. Their anchor and running lights showed as dull glows in the fog as I came alongside. We exchanged greetings and I passed them a tow bridle with a tow hawser attached. Let’s call the Captain Rob. Rob ran the bridle outboard of their bow rail and attached an eye to each of his two forward cleats.

I described the likely situation of the trip back north to their marina. We would try to maintain 6 to 7 knots of speed, would tow them about 50 yards astern, and we would both stay on VHF channel 7 for communications. I told Rob he needed to keep someone on the helm at all times, and to steer to the center of my wake if they could see it. If caught by a severe thunderstorm, I would shorten the hawser and hold us both bow to the wind until the worst of the storm had passed.

The tow back was slow and relatively uneventful, except for the ever closer and louder rumbles of thunder. Most of the time I was unable to see the sailboat behind me due to the fog, and periodically gave the hawser a tug with my hand just to be sure she was still there. I spoke with Rob on the VHF as we approached their harbor. I stopped, put the tow boat in neutral, and allowed Rob’s boat to glide up on my starboard side while hauling in and shortening the tow hawser.

The big sailboat glided up beside me like a ghost in the night until I was able to lash her port hip to the tow boat. This is standard procedure for maneuvering a tow in the tight spaces of a harbor and into a dock or slip. With visibility so low, I asked Rob to position his crew along the length of his boat and alert me if we were too close to anything.

We were picking our way carefully through the anchorage filled with boats when all hell broke loose.

Fortunately we were very close to his dock and just as I nudged them against their pier, lightning flashed, thunder crashed, and rain came down like we were directly under a fire hose. Rob and his crew quickly secured their boat to the pier. I told Rob we would deal with paperwork another day, and he scurried up the dock with his crew to a waiting knot of people clustered under umbrellas. Their loved ones had been worried and were glad to see them safely home.

I piled the tow hawser and bridle unceremoniously on my aft deck, retrieved the lines holding me to Rob’s boat and slowly picked my way to a nearby marina where my friend Don kept his 31’ Cabo sport fisherman. By now lightning made it look like daylight and rain was literally dancing off the surface of the harbor and pounding on my aluminum hull and pilot house. It was a little scary but also eerily beautiful.

Then came decision time, should I hide out until the storm passed or fight the weather to return to home port an hour away?

I made the safer choice, tied the towboat to the dock, and climbed aboard Don’s boat. Thankfully the Cabo was fiberglass and not metal like Rescue Boat Phoenix so it provided some protection from the ever-present lightning.

Dispatch radioed that there would very soon be a break in the storms, and I had about 60 minutes to get back to base before the next round rolled in. I took advantage of the brief weather window, left the shelter of my friend’s marina, put the hammers down and pulled the rescue boat up to our home dock exactly one hour later.

The boss, Captain Keith, stood on the dock awaiting my arrival. He had heard our radio exchanges on the VHF located in his home and made his way back to base in the middle of the night, relieving Captain Mark. He helped me secure the boat and then made a statement I have never forgotten.

“Being a rescue boat captain is not for everyone!”

Simply stated, it is never over until it is over when you are on the water. Yes, that night I was able to help a vessel needing assistance. I was in a very seaworthy but open metal RIB boat, on a turbulent expanse of water in a severe thunderstorm. Life on the water is all about assessing risk and making smart decisions rather than emotional ones. Is it worth it to risk the boat, perhaps even my life, to immediately get back to my home dock? Only the captain can decide, and when dealing with weather, you can never be sure of the intensity or duration of a storm on the water. Usually the conservative decision is the better one and will help you survive to fight again another day. Even if you have to “borrow” someone’s dock or mooring and tie up until the storm passes.

As told in this story, weather is always a key player in safety on the water. This true story was taken from the book, Rescue Boat, that Captain Bob and I recently published. It’s available in both print and electronic format – be sure to check it out for even more stories from the water. 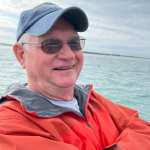